Up to 200,000 people are expected to come into the city for the parade, and millions more across the country are expected to join in the events by watching it on network television.

Two years in the planning, this will be the inaugural staging of an event that is destined to become a Gold Coast tradition, not to mention the biggest summertime Christmas pageant in the world.

Mass media advertising and publicity will support the event, making sure that the Gold Coast Christmas spirit will truly bring joy to Australia, and the world.

The Gold Coast Christmas Parade will include up to 18 colourful floats, dancers, marching bands, street performers, celebrities, and community groups. It will stretch 2.6kms along the Esplanade from Narrowneck to Northcliffe Terrace.

At the Parade’s end, the floats will settle at Northcliffe from 2pm-5pm, with entertainment – including face painting and streetwalkers – laid on for the whole family.

Television and radio media partners will broadcast the moving floats and performances of the Parade live, and also during the afternoon following the Parade at Northcliffe.

Our newspaper media partner will feature a souvenir supplement on the day, as well as family promotions in conjunction with the parade activities.

We believe that the Markets held weekly along the promenade will be a wonderful complementary event that will both benefit from and feed into the festival atmosphere of the Parade.

There are opportunities for local and national charities to raise funds during the Parade, and we are currently in discussion with the State’s Schools to hold a design competition for the banners that will decorate the CBD. 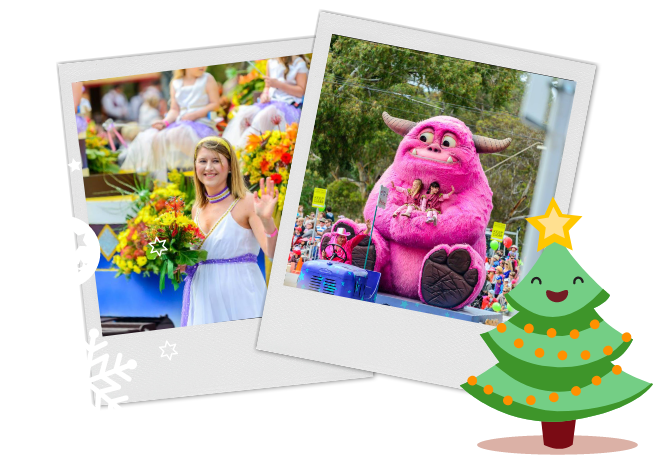 Christmas… That most special time of the year for children, no matter what their age. The time for coming together, for peace, for celebration of all that being part of a family means.

Now there’s a city focus– a community focus– for that time.

And Christmas… That most important time of the year for business, when the efforts of eleven months so often rely on the success of the twelfth.

At last, with the Gold Coast Christmas Parade and its associated activities, there is a focus for that effort and a genuine opportunity for rewarding involvement.

The target market is the biggest consumer segment in the land – families.

Forget about the demographics, psychographics and geographics; this event transcends all that and goes directly to the heart of the community and a way that has never before been achieved on the Gold Coast.

If your company’s values reflect community involvement, this is the involvement it needs.

Participation in the Gold Coast Christmas Parade, whether by way of Partnership or Float Package, gives you access to a valuable market in a way that reflects the hopes and dreams of the community at this most special time of the year.

Benefits of participation can include involvement in the following events:

The inaugural Gold Coast Christmas Parade along the Esplanade on the Sunday 4th December 2022.

Coverage of the Parade on network television.

200,000 souvenir programs to be distributed at all events associated with the Parade.

Flagpole banners throughout the Gold Coast.

Street signage along the Parade’s Route for 2.6km.

The floats on display on the sand at Northcliff Surf Club, with entertainment for the whole family following the parade.

Product sampling and sales promotion opportunities at all events.

It’s the event that will change Christmas on the Gold Coast forever!

A float in the Gold Coast Christmas Parade can provide the focus you need for your 2022 Christmas promotional activity, generating brand awareness to catapult your company into 2023.

Your company, your brand, your product, or your service will be showcased to an excited and receptive family audience on the Gold Coast, estimated to be up to 200,000 people.

You will receive exposure on network TV, in Parade publicity, and at the many other events that will be associated with the Parade.

A strictly limited number of positions are available, and preferences will be allocated on a ‘first come– first served’ basis.

Contact us now to find out more about sponsorship packages